There are a total of seven series, each with 13 Cattlelogs. After series 7, the items in the Cattlelog will repeat from series 1. This means that series 8 will have the same items as series 1, series 9 same as series 2, and so on. When a new Cattlelog is released, some of the new items in the old Cattlelog will be moved to the backorder. Items in the backorder have higher prices, but they are still available to purchase. A new series is released every 13 weeks, for a total of 70 weeks before rolling back to Series 1.

For example, the Cactus Hammock costs 550 jellybeans. If multiplied by 1.2, the backorder cost is 660 jellybeans.

For example, the Tall Bookcase costs 650 jellybeans. If divided by 1.334, the sale cost is 487 jellybeans, rounded to the nearest ones.

The back of the Cattlelog contains various special items - clothing and emotions - that can be purchased upon being a number of days old since account registration.

Each item belongs in a category. Depending on the category they belong depends on how long the item will take before being placed inside the mailbox. See the table below for delivery times.

Clarabelle notifying a toon a new Cattlelog is available

The telephone, used to call Clarabelle and make purchases 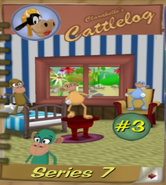