Clothes are shirts, shorts, and skirts that toons can wear. Toons are able to pick out clothes during the Pick Your Clothes phase in the Create-A-Toon. Subscribed players are able to buy clothes from Clarabelle's Cattlelog.

Shirts can be found in the Cattlelog, through special events, from clothing stores, or codes given out by the Toon Council. Obtaining clothes from clothing stores will require a clothing ticket, which toons can get by completing a toontask given by an HQ Officer.

Themes usually depend on the series of Cattlelog. During holidays, members are able to buy holiday-themed clothes.

Event clothes can be acquired from meeting the required goal of the main event. As such, if a toon manages to win, they will earn a special type of clothing or other exclusive items given out to the winners.

Like shirts, there are holiday-themed shorts and skirts, and themes depending on the Cattlelog series.

Some shirts, shorts, or skirts can only be obtained by entering a special code in the Shticker Book.

This list shows all the codes that were released but are right now expired: 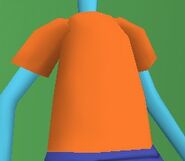 An example of a shirt 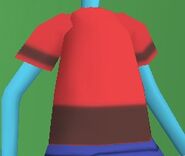 Another example of a shirt

An event that happened on the French version of Toontown where new clothes were added to the game.

desat_shirt_16
Community content is available under CC-BY-SA unless otherwise noted.