Protected
watch 01:40
The Sandman Will Keep You Awake - The Loop
Do you like this video?
Play Sound

Cog headquarters are areas of Toontown that are permanently controlled by cogs. These areas are usually more difficult and dangerous compared to other locations in Toontown. As toons progress further into the game they will be assigned Toontasks related to the four cog headquarters. 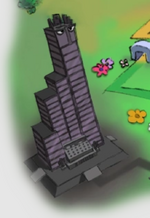 Sellbot Headquarters (sometimes abbreviated SBHQ) was released on December 19, 2003. The theme is an industrial wasteland. Its most important areas are the Sellbot Factory and Sellbot Towers. Cogs ranging from Cold Callers to Two-Faces are in its courtyard. It is controlled by the Vice President and the Sellbots.

Cashbot Headquarters (sometimes abbreviated CBHQ) was released on February 17, 2005. The theme is a gigantic train station. It has three mints and a vault. Cogs ranging from Tightwads to Money Bags are in the main area, the train yard. It is controlled by the Chief Financial Officer and the Cashbots.

Lawbot Headquarters (sometimes abbreviated LBHQ) was released on April 25, 2006. The theme is a clean marble plaza in a city. It has the District Attorney's office and the courthouse. Cogs ranging from Ambulance Chasers to Spin Doctors are in the courtyard. It is controlled by the Chief Justice and the Lawbots. 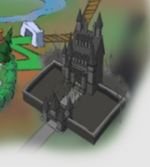 Bossbot Headquarters (sometimes abbreviated BBHQ) was released on March 6, 2008. Its theme is a country club. It has three cog golf courses and the Bossbot Clubhouse. Unlike the other cog headquarters, there are no cogs in the main area, and there are no goons in the entire headquarters. It is controlled by the Chief Executive Officer and the Bossbots.

Throughout Toontown's early development, there had been many initial designs on who the final boss of Toontown would be and how to reach endgame.

The cog HQ signs that were on the streets tunnels of Oak Street, Polar Place, and Pajama Place

Toon being hit by a cog in the Vice President battle.
Community content is available under CC-BY-SA unless otherwise noted.
Advertisement