A Cog Facility can be found in Cog headquarters. Facilities contain various types of cogs, such as the corresponding type of the headquarters and goons, and several obstacles that toons must maneuver in order to complete the facility.

Cogs normally range from level 10 to level 12. The only exception to this is Sellbot Factory, in which the Factory foreman is the strongest cog, whom is level 9. 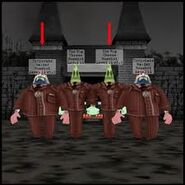 Cogs in the Cog Golf Course, two being Version 2.0 Cogs.

The Factory Foreman supervising over its workers in the Sellbot Factory.

Loan Sharks with the Mint Supervisor in the Cashbot Mint

A Goon patrolling the Catwalks in the Sellbot Factory.

The Stomper Alley in the Factory that leads to the Lava Room.

The Spinning Gear Stack being conquered by toons in the Cashbot Mint. 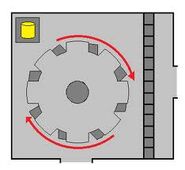 A Diagram of the Gears.

The Map of the Room with the Stomper in the Cashbot Mint. 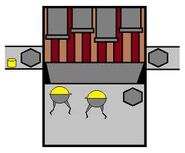 A Diagram of The Shover.

Searchlights in the District Attorney's Office.

Spotlight Group in a room in the District Attorney's Office. Notice the Gag Barrels.

The Box Stomper in the Cashbot Mint.

The Stomper Lift in the District Attorney's Office.
Add a photo to this gallery
Retrieved from "https://toontown.fandom.com/wiki/Cog_facilities?oldid=160024"
Community content is available under CC-BY-SA unless otherwise noted.