The cog golf courses are advanced cog facilities located in Bossbot Headquarters. Cogs inside are levels 10 and 11 with some of them being V2.0 cogs.

There are three cog golf courses: The Front Three, The Middle Six, and The Back Nine.

Cog golf courses, similarly to District Attorney's Offices, are made of floors- each contains a sequence of rooms with obstacles, and the toons need to successfully complete them, in order to get to the next level, and eventually get to the Club president- the boss of the course.

Each floor contains the following rooms, by the given order (see the obstacles section for more information):

In the first and middle floors, the final room has a golf cart which leads the players to the next floor. In addition, the maze does not exist in one of the floors in each one of the courses; the second floor in The Front Three and the first floor in The Middle Six and The Back Nine.

In the cog golf courses there are three obstacles:

In this obstacle there are several mole hills. Inside these mole hills are two types of moles: the brown mole and the red mole. The main objective is to stomp on the red moles. Stomping on brown moles will result in the toon flying in the air. Once the required amount of moles have been stomped, the doors will open. Failure to do so will result in losing twenty laff points, and the toons will have to reattempt the challenge.

An aerial view of the Maze. 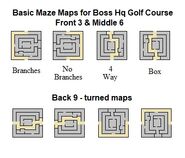 Toons work on separate puzzles. All toons will need to work together to complete a number of puzzles. Completing a puzzle rewards each toon with a random level four or higher gag. 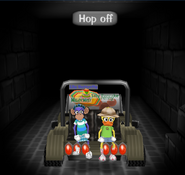