A cog suit (called cog disguise in the Shticker Book) is an outfit toons use to disguise themselves as a cog. It is essential in order to infiltrate the boss's domain in the cog headquarters.

Each cog headquarters use a different disguise, in correspondence with the cog type of the headquarters. In order to acquire a cog disguise, toons will need to earn them by completing Toontasks, or in the case of the Sellbot cog suit, by completing ten Sellbot factories.

After acquiring the complete set, a toon can begin earning Merits for Sellbot, Cogbucks for Cashbot, Jury Notices for Lawbot, or Stock Options for Bossbot. Once the required amount of the item is collected, the toon may enter the corresponding boss domain and fight the boss to earn a promotion.

When a toon is promoted, the toon gains a level in their cog suit. By completing five levels of one type of cog, the toon will be promoted to the next level of cog. After completing all seven cog types, the toon can move on to the last cog of the corporate ladder. Unlike the other cogs, the highest cog in the corporate ladder can reach up to level 50 in the cog disguise. After reaching level 50, the toon no longer needs to earn the corresponding item, and they may fight the boss without restrictions of the need for the promotional item. Also, reaching certain levels in the last cog type will reward a laff boost, with a total of five laff boosts if the cog suit is completed.

Toons have the ability to check their progress on their cog suit in their Shticker Book. They may check the amount of parts they have acquired or the amount of the promotional item that needs to be collected.

During the events of Operation: Storm Sellbot on August 2010, toons, including non-members, without cog suits were given a rental cog suit in order to access Sellbot Towers. 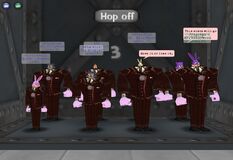 Toons in Sellbot Suits on the elevator to Sellbot Towers. 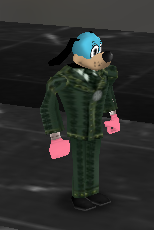 A toon using a cog suit. 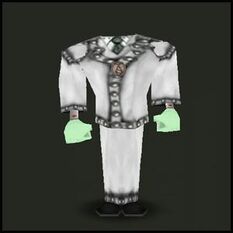 A model of the Cog Waiter Suit from Bossbot HQ. 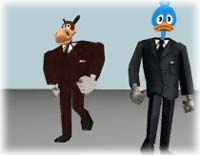 A toon in a level 50 Mr. Hollywood Suit
Add a photo to this gallery
Retrieved from "https://toontown.fandom.com/wiki/Cog_suit?oldid=129339"
Community content is available under CC-BY-SA unless otherwise noted.