Start a Wiki
Doodles are pets that a toon can buy at a pet shop.

They are kept at your estate and can also learn tricks. When a Doodle does a trick then, nearby toons get laff points. Doodles that are purchased from pet shops in more advanced playgrounds, such as Donald's Dreamland, The Brrrgh or Minnie's Melodyland, are more likely to learn tricks faster than those bought in Toontown Central, Donald's Dock or Daisy Gardens. Those advanced playgrounds also have more "decorated" doodles along with being more expensive. The highest price seen is 4,998 jellybeans, however this is only found in Donald's Dreamland and The Brrrgh. The lowest-priced doodles are found in Toontown Central, where the highest price is 220 jellybeans. Unlike other playgrounds, doodles can be purchased from Toontown Central whether the user is a paid member or not. Each toon can have only one doodle.

Every toon starts out with the phrase "Jump!" under "Pets" in the SpeedChat.

If you say a command phrase, your doodle will either do the trick or a question mark will rise above their head.

Trick phrases can be purchased from Clarabelle's Cattlelog for 600 jellybeans.

Training and caring for a Doodle

To train a doodle all you must do is say the trick you want your doodle to do until they do it.

Some doodles are more lazy or stubborn then some and are harder to train. Once a doodle does a trick, more often than not, they will be tired. To make your doodle not tired you must either feed or scratch the doodle a few times until the "sleepy" icon above their head goes away or is replaced by another more positive one.

Doodles eat jellybeans and some become hungry more often then others. Some doodles do not have to be fed much at all but it is wise to feed your doodle often.

When a doodle is feeling excited, hungry, sad, tired, angry, bored, loved or lonely, an icon will show up above the doodle's head.

Doodles can also be called to do tricks while fighting cogs. In the SOS menu, you can click your doodle's name and tell it to do a trick. Your doodle will come out of a teleport hole in front of you. If the doodle doesn't do a trick, it shows a "?" above its head, and then teleport back to your estate. If it does do a trick, every toon in that cog battle will get laff points, depending on what trick it did.

From April 1 to April 7, doodles can talk for April Toons Week.

When your doodle is angry, it may say the phrases "You always leave me behind!", or "You wonder why I never give you a Toon-up?!!!" or "You love your gags more than you love me!".

When your doodle is sleepy, it may say the phrases "I gotta get to Dreamland!", "That swim in the pond really tired me out!" or "Being a Doodle is exhausting!".

"Is that Flippy's Doodle over there?" "I think I just saw him!"

And so forth. Many people went into the streets to investigate, and found a weird ditch along the side of the road in Tenor Terrace. The ditch is there to this day.

In August 2010, some doodles from Daisy Gardens escaped and went to Sellbot HQ. They started chewing the cables there. Thanks to the doodles, Operation: Storm Sellbot began. Because of the cables, the factory was running low on higher-level cogs, and the VP's attacks took less laff points. The doodles were recovered. The Daisy Gardens pet shop still has the broken wall from when they escaped.

Toons can call their doodle in Battle to do Toon-Ups by doing a trick. 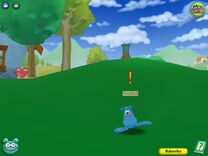 An angry doodle while swimming.

Two doodles in an Estate 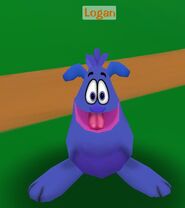 A royal blue doodle named Logan.
Add a photo to this gallery
Retrieved from "https://toontown.fandom.com/wiki/Doodle?oldid=113369"
Community content is available under CC-BY-SA unless otherwise noted.