Fishing is an activity in Toontown in which toons catch and sell fish. It is a very useful method of getting jellybeans. There are seventy fish species to find, seven trophies to receive, and consequently seven possible laff boosts. They came out on the Test Server on October 30th, 2003[1], and was publically released on November 14th, 2003[2].

Each cast costs one to five jellybeans. The amount of jellybeans it costs to cast depends on the type of fishing rod the toon is using.

Toons are able to catch other objects while fishing, such as old boots and additional jellybeans from jellybean jars. The old boot is only useful in Fishing Bingo, where it can be used to fill any space on the board. The amount of additional jellybeans toons may receive depend on the fishing rod toon is using.

Ponds are where toons go to fish. There are ponds in all playgrounds, streets, and estates. To use a fishing pond, just walk up to an un-occupied dock; your toon will automatically pull out their fishing rod, and you may begin to fish. Each pond consists of two fishing shadows, with the exception of the toon's estate, which consists of three. The goal is to land on the shadows, in which the toon may catch a fish or an object.

There are five rods in Toontown. Each toon starts out with the weakest rod: the Twig Rod. Toons can purchase stronger fishing rods through Clarabelle's Cattlelog. Stronger fishing rods will be able to catch rarer fish but will use more jellybeans for each cast. The gold rod is the strongest rod. The order of the least advanced rods to the most advanced rods is listed below:

Fish Bingo is an event that takes place every Wednesday and Saturday. Toons work together at the pond to fill a bingo card shown at the bottom right of the screen. As toons catch fish, they can mark the corresponding spot, indicated by the spot flashing red. When a toon catches an old boot, they may use that to fill in any spot on the card.

For every ten new species that a toon catches, he or she will earn a trophy. There are seven trophies, and each one gives one point laff boost. Seven laff point boosts can be earned from fishing.

All the trophies' in a list from lowest to highest:

There have been a variety of fishing tournaments, hosted by Melville or Billy Budd. The goal is to catch the most fish within the time period given. The winner usually receives a contest shirt. 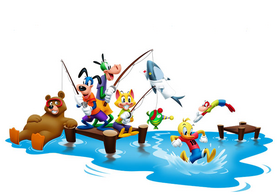 Flippy and some other toons fishing. 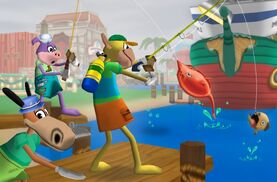 Melville's Annual Fishing Tournament.
Add a photo to this gallery

Cite error: <ref> tags exist, but no <references/> tag was found
Retrieved from "https://toontown.fandom.com/wiki/Fishing?oldid=157759"
Community content is available under CC-BY-SA unless otherwise noted.