Funny Farm was a planned neighborhood in the early development stages of Disney's Toontown Online, among a total of "eight or nine" neighborhoods that were originally planned for the game. According to Jesse Schell, the Streets system didn't work quite well with the farm aesthetic, resulting in the neighborhood being scrapped.[1]

ToonFest 2006 featured a new map in the Shticker Book that teased a Construction Zone (now Chip 'n Dale's Acorn Acres) and Bossbot Headquarters. The map also featured a small, blurry area north of Goofy Speedway that read "Funny Farm" if the player hovered over it.[2]

On March 12, 2016, Jesse Schell posted the original concept art for the full map on his Twitter, which correlates with the ToonFest 2006 Shticker Book.[3]

The map featuring Construction Zone and BBHQ; note the blurry area north of Goofy Speedway on the top-left 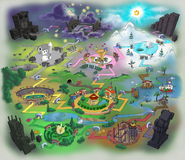 The full Toontown map concept art, with Funny Farm located north of Goofy Stadium before it was redesigned as Goofy Speedway
Add a photo to this gallery

Funny Farm was, as the name implies, planned to be a farm playground. However, the playground would have had a black and white color scheme, paying a tribute to the classic Mickey Mouse cartoons. The playground owner was debated within the development team to be either "Farmer Goofy" or "Farmer Donald"; in particular, "Farmer Donald" was already featured in some older Disney cartoons.[1] However, Jesse Schell replied to a comment on his reveal of the beta map on Twitter saying that the playground would have also included Oswald, Clarabelle and Black and White Mickey, which were ideas from Bruce Woodside.[4]

Due to Funny Farm never making it past the conceptual stage, it is unknown where it would have fallen in the players' neighborhood progression.

Funny Farm's streets would have been populated with barns and farm buildings. The streets would have connected to Donald's Dreamland, Minnie's Melodyland, and Goofy Stadium before it was redesigned as Goofy Speedway. However, this wasn't a popular idea among the developers, as it wasn't "farm-like enough"; they wanted to see "big, open fields for it to be a farm" and it wouldn't have supported the street system already in place in other neighborhoods.[1] The streets system was the biggest reason why Funny Farm was never released.

Retrieved from "https://toontown.fandom.com/wiki/Funny_Farm?oldid=165114"
Community content is available under CC-BY-SA unless otherwise noted.