Protected
watch 01:36
We're Getting Mutants in the MCU - The Loop
Do you like this video?
Play Sound

Gags are jokes used by toons to defeat the cogs. When enough gags are used on a cog, it explodes from laughter. But if a toon becomes sad, they lose all the gags they have. There are forty-nine gags; however, only forty-two are obtainable at once.

Gags can be bought in Goofy's Gag Shop for one jellybean each. There is a gag shop in every playground, except Chip 'n Dale's Acorn Acres and Goofy Speedway. The first six gags in each gag track can be bought, but level seven gags must be earned by reaching 0 to Go! or by harvesting the level seven gag from a gag tree.

Toons store all their gags in a backpack. Every toon starts with a small pouch, that can hold twenty gags. Toontasks can reward bigger gag pouches. The biggest gag pouch is the large backpack, that can hold eighty gags.

Every toon starts with the level one Throw and Squirt gags; the Cupcake and the Squirting Flower respectively given from Tutorial Tom. All "cog-fighting" neighborhoods give toons the ability to choose a new gag track to train for, excluding Daisy Gardens and Donald's Dreamland. Once they have chosen the gag track, they can start doing toontasks to earn gag track training film frames; 16 frames for a gag track training film are required to obtain the gag track. Toons may only obtain the final frame after they have done all of the other required toontasks in their current neighborhood, including having earned the first fifteen of the sixteen frames.

In each neighborhood (excluding Donald's Dreamland and Daisy Gardens), a toon is given the chance to gain a gag track. The options switch every time. In Toontown Central, you can choose Toon-Up or Sound; in Donald's Dock, Lure or Drop; in Minnie's Melodyland, either Toon-Up or Sound for the first option with Trap as the second option; and in The Brrrgh, the two remaining gag tracks your toon does not have.

Trap gags are the second gags to be used in battle. Unlike other gags, Trap gags need the aid of Lure gags. Trap gags are deployed in front of the cog, and when the cog is lured, it falls into the trap. However, if another toon uses Trap on the same cog, the trap will disappear. Trap gags have a perfect accuracy. The Trap gags are:

Lure gags are the defense mechanism. They are the third gags to be used in battle. Lure gags lure the cog(s) forward, stunning them in the process. Once they are lured, they will stay lured for a number of rounds, depending on the gag used. If the Lure is successful, the cog or cogs will not attack for a series of rounds. Lure gags are necessary for trap gags to work. Lure gags have a low accuracy (medium accuracy if organic). If a toon attacks a cog that is lured, there is a 50% chance a lure bonus is added to the damage dealt. The Lure gags are:

Sound gags target all cogs. They are the fourth gags to be used in battle. It is the only gag track where every gag targets all cogs. Sound gags have a high accuracy, but does not do lots of damage. The Sound gags are:

Drop gags are the last gags to be used in battle. Unlike other gag tracks, Drop gags (other than the Grand Piano) do not need experience points to do higher damage. Drop gags have a low accuracy. The Drop gags are:

Using a gag earns skill points for the gag track it belongs to. How many points a toon earns for that gag track depends on the gag's level. For example, a level one gag gives one skill point, a level two gag gives two skill points and so on. However, if the Cog being attacked is at a lower level than the gag, then the toon will receive no skill points. A cog invasion will double all skill points earned by using gags. Cog buildings also multiply experience points, depending on how many floors the building has.

The amount of gags from each type differ based on how many gags the player has earned. The more gags earned, the more gags from the same type can be carried.

Trap gags, while powerful, cannot be carried in the same quantities as gags from other tracks.

Gag trees are unique trees that grow gags. Toons can plant a gag in one of the mounds on their estate. After several days, the tree will be fully grown and can be harvested. Gag trees also serve another function in that the damage in battle, a Toon-Up gag's healing, or a Lure gag's accuracy will sharply increase. When a gag is planted and picked, it gains the "organic" gag status, meaning the gag picked will have higher damage, higher Toon-Up, or more lure accuracy. 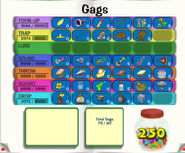