Glad Hander is the fourth cog on the corporate ladder of Sellbots. Their head looks very similar to that of a Yesman and Mr. Hollywood but this cog is rather overweight. They range from level 4 to 8. 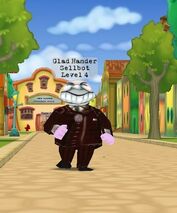 A Glad Hander on a Toontown Central street. 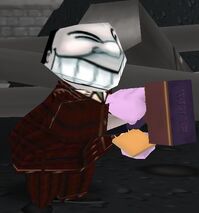 A group of Glad Handers being lured in the Sellbot Factory. 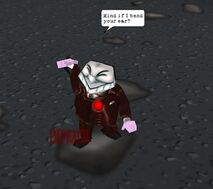 A Glad Hander being fired. A Glad Hander saying "I'm the boss."
Add a photo to this gallery
﻿
Retrieved from "https://toontown.fandom.com/wiki/Glad_Hander?oldid=112001"
Community content is available under CC-BY-SA unless otherwise noted.