Goofy Speedway is a playground accessible via the tire-shaped tunnel in Toontown Central. Toons may compete in races and purchase karts and kart accessories in Goofy's Auto Shop. Goofy Speedway is home to Goofy and was introduced to the game in August 25, 2005 via Test Server and September 15, 2005 publicly.[1]

There is also a leaderboard which displays eight toons with the quickest times in each race track. There are daily scores, weekly scores, and all-time.

Before a toon can start racing, they must purchase a kart, the Cruiser, in Goofy's Auto Shop. Within the auto shop are four toons: Anita Winn, Graham Pree, Ivona Race, and Phil Errup. A toon may communicate with any of these toons. When speaking with one of the NPCs, they will give toons the option to purchase karts or accessories.

In order to purchase other types of karts, other than the Cruiser and kart accessories, the player's account must have a membership status.

Unlike other methods of purchasing through the use of jellybeans, the currencies are tickets. Each toon starts with 200 tickets. A toon may earn more by participating in races. Practice races require no deposit and will reward a toon with twenty tickets. In order to partake in battle races, the toon must have the specified amount of tickets. Each race track have a different set amount of deposits.

During battle races, the number of tickets rewarded will depend on the number of participants. The higher the placement, the more tickets the toon earns. Bonus tickets may be rewarded if a track record is beaten.

There is a total of twelve tunnels. There are three types of races: stadium, rural, and urban. Each consist of four tunnels, half of which are practice entrances each; each also has a difficulty: stadium being easy, and urban being hard. There are six race tracks according to the type of race:

Practice races allow toons to participate in a practice run. They require no deposit. Completing the track rewards twenty tickets, regardless of time and place. Toons may race alone or with three other toons.

Battle races allow toons to race against other toons. Depending on the race track, the deposit will vary. The higher the placement after crossing the finish line, the higher the tickets the toon receives.

During battle races, there will be gift boxes scattered around the track. Picking up a gift box will give you an item in which a toon may trigger. Each item has a specific role:

For a player to move their kart, they can use the arrow keys:

During battle races, if a toon picks up a gift box scattered around the race track, they may trigger the item by pressing the Ctrl key on the keyboard.

The Grand Prix is held every Monday and partially during Silly Saturday. Toons may race with other toons to compete in three consecutive race tracks. There are two circuits, each with three tracks:

Like the other activities, competing in races will reward toons with trophies. There are thirty trophies; for every ten trophies the toon obtains, the toon earns a laff boost. The trophies may be viewed in the "Racing" section of the Shticker Book.

On March 12, 2016, Jesse Schell posted the original concept art map (shown on the right) on his Twitter that was seen in the 2003 Toontown Online commercial clearing up some past rumors, one of them being an original concept for Goofy Speedway called Goofy Stadium. It was planned to be based off a book in 1972 called Goofy the Sportsman, where Goofy competed in various sports to become the champion of the Disney Olympics. The playground was removed due to the street system, much like Funny Farm, as well as not having all the sports ideas thought out. The area was reworked into the sub-playground now known as Goofy Speedway.

Showcasing a toon's kart on a podium

An advertising picture of racing from Toontown Japan's website.

An advertising picture of racing from Toontown Japan's website.

A screenshot of buying a Kart used to advertise racing for Toontown Japan.

A news announcement for racing from Toontown's French website.

An image of a cat Toon driving a Kart.

An image of the "Toontown Grand Prix" event. 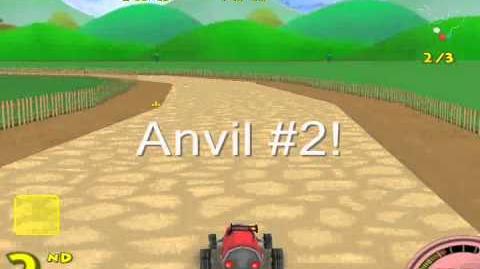