Hypno Goggles is the level six Lure gag. It succeeds the $10 Bill but precedes the Presentation.

As with all Lure gags, the Hypno Goggles does not do any damage. Instead, it lures all cogs, disabling them in the process or activating any Trap gags deployed before luring. It has a low accuracy of 70%. The duration of the lured cogs will last around four rounds. If grown on a tree and is organic, the accuracy of the gag increases to medium.

A toon can carry a maximum of three Hypno Goggles.

As a Lure gag, it deals no damage to cogs, therefore it does not increase in damage over the training progress nor does the accuracy increase. 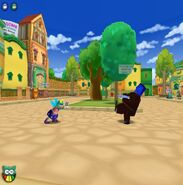 Using Hypno Goggles on a Level 1 cog.
Add a photo to this gallery
Retrieved from "https://toontown.fandom.com/wiki/Hypno_Goggles?oldid=165711"
Community content is available under CC-BY-SA unless otherwise noted.