Mickey Toon Hall is a toon building in the Toontown Central playground where Flippy and the Silly Meter reside.

The Silly Meter is a meter that tracks Toontown's silly levels. It was full until a whole two-week marathon of cog invasions sucked all of its energy to sleep mode, causing the Loony Labs scientists to move it out for some repairs. However, its silliness was so strong that not just the fire hydrants came alive, but the trash cans and mailboxes began to animate too. The Silly Meter was out for a long period of time but it makes its return for April Toons' Week.

Flippy's office is a place where Flippy, the president of the Toon Council, lives. There is a painting of him, his trophies, portraits of gags and toons, and Flippy's very own desk. He keeps everything in order when there's a cog attack. In his hallway are the first gags he ever used.

The entrance to Flippy's office

Flippy himself at his desk

One of the Loony Labs scientists, Professor Prepostera. 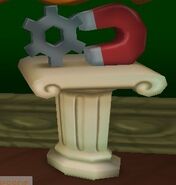 An illustration of Mickey Toon Hall's exterior from Toontown JP.
Community content is available under CC-BY-SA unless otherwise noted.
Advertisement