The pet shop is a store located in playgrounds where you can adopt doodles and sell fish.

The exterior design resembles a fire hydrant. There is a bone-shaped logo with "Pet Shop" written on it. The top is designed as a fish bowl with large fish swimming within it. Also, on each side, there are windows displaying photos of doodles.

Inside, it is shaped like a large circle, not including the clerks' desk. On the shelves, fish-bowls and water bowls are stacked on top of each other, while several snapshots of doodles hang high upon the walls. Behind the clerks are two large goldfish who swim around in their fish tank.

Doodle prices and dependabilities depend on the playground. Donald's Dreamland has very expensive but reliable doodles when doing tricks. Their doodles range from 3500-4998 jellybeans. In Toontown Central, however, doodles almost never respond to tricks but are very cheap, only being about 200 jellybeans.

The inside of a pet shop. 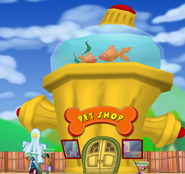 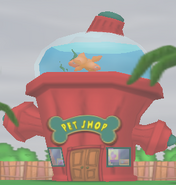 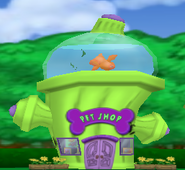 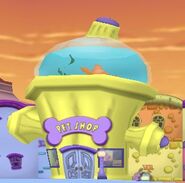 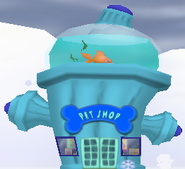 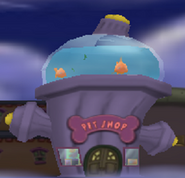 Donald's Dreamland
Add a photo to this gallery

Retrieved from "https://toontown.fandom.com/wiki/Pet_shop?oldid=166396"
Community content is available under CC-BY-SA unless otherwise noted.