A pumpkin head is a toon effect that can be earned by saying the special SpeedChat phrase "Trick Or Treat!". This is similar to the snowman heads. 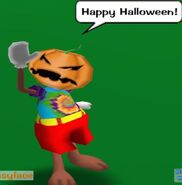 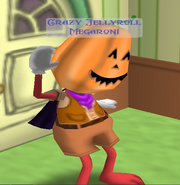 Add a photo to this gallery

Retrieved from "https://toontown.fandom.com/wiki/Pumpkin_head?oldid=164343"
Community content is available under CC-BY-SA unless otherwise noted.