The Resistance Salute is an emotion offered to toons for free by joining the toon resistance. They can earn the emotion by visiting Whispering Willow at Talking in Your Sleep Voice Training in Pajama Place, Donald's Dreamland and saying the SpeedChat phrase "Would you like some help?" 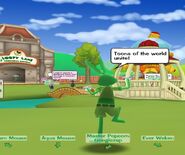 A toon using the emotion.

A logo showing off the Resistance Salute.

A promo button that features the Resistance Salute rabbit icon.

The phrase being spoken in French. (From Toontown French)
Add a photo to this gallery
Retrieved from "https://toontown.fandom.com/wiki/Resistance_Salute?oldid=163749"
Community content is available under CC-BY-SA unless otherwise noted.