Sandbag is the level two Drop gag. It succeeds the Flower Pot but precedes the Anvil.

Unlike other gags, the first five Drop gags do not increase their damage throughout the course of Drop training. As such, the Sandbag can deal a maximum damage of "18". If grown on a tree and is organic, the maximum damage increases by one. It is capable of defeating level two cogs in one hit.

As with all Drop gags, except the Toontanic, the Sandbag targets one cog.

Unlike other gag tracks, the Sandbag does not increase in damage over the course of Drop training. 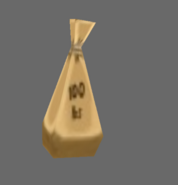