Start a Wiki
The Sellbot Cog Suit is the cog suit that is needed to access Sellbot Towers and fight the Senior Vice President. In order to get the cog suit, toons need to go into the Sellbot Factory and defeat the Factory foreman, located in the control room on the center silo. Each time the Foreman is defeated, the toon will receive a Sellbot cog suit part. A complete Sellbot cog suit has ten pieces.

Toons also need merits to get a promotion for their Sellbot cog suit. To earn merits, defeat Sellbots. The amount of merits earned from each cog depends on its level.

There are different amounts of merits needed to be ready for a promotion. Once the toon has all of their merits and cog suit pieces, they can go into Sellbot Towers, where the Senior Vice President is. After the VP is defeated, the toon's cog suit goes up one level. This means that they received a cog promotion from the VP. The minimum in cog suits is level 1 Cold Caller and the maximum is level 50 Mr. Hollywood. 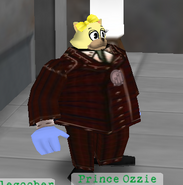 A cat wearing a suit

Boarding group in elevator
Add a photo to this gallery
Retrieved from "https://toontown.fandom.com/wiki/Sellbot_Cog_Suit?oldid=165366"
Community content is available under CC-BY-SA unless otherwise noted.