The Sellbot Factory is a cog facility in Sellbot Headquarters. It was first released on December 19, 2003. [1] Toons can battle Sellbots and earn Sellbot cog suit parts or Merits for a promotion. Inside of the factory are many groups of Sellbots, goons, obstacles, and barrels added by the Toon Resistance for toons to restock gags, laff points or jellybeans. A group of four toons can enter the elevator or form a Boarding Group to defeat the cogs in the factory. The factory has two entrances: the front entrance and the side entrance. The cogs in the Sellbot factory are level 3 to level 9.

This map was found by a doodle in Sellbot Headquarters. It was released to provide toons with a map of the factory. Toons need to battle the Foreman to get all the pieces to their Sellbot cog suit.

Each of the normal Sellbots has a chance to appear in the factory (but the Mr. Hollywood can only appear as a skelecog, the foreman). In total, there are 35 cogs in Sellbot Factory.

A label on the screen will show where a toon is located in the factory.

Front Entrance
The southernmost door in the factory.

Lobby
Between the front entrance and the hallway. Contains 3 cogs (3, 3, 5) and a goon (3 damage). A button unlocks the door to the hallway.

Hallway
Between the lobby and the lobby hallway. Contains a Throw (Birthday Cake) restock barrel.

Paint Mixer
Between the West Catwalk and the Paint Mixer Storage Room. Contains a puzzle that involves jumping from moving platforms and avoiding falling in toxic paint below.

Warehouse Lookout
A balcony overlooking the warehouse. It is a dead end, not a shortcut.

Warehouse
An important room of the factory connecting the upper and lower parts. Contains 4 cogs (4, 5, 5, 6) which must be defeated to proceed. Stepping on buttons will activate the stompers to crush the goons (10 damage) wandering in the room. One of the buttons also unlocks a door to the silos. The warehouse connects to the West Catwalk, East Catwalk, West Silo Catwalk and East Silo Catwalk.

West Silo Catwalk
A short catwalk connecting the warehouse to the West Silo via an elevator (called the West Elevator Shaft).

East Silo Catwalk
A short catwalk connecting the warehouse to the East Silo via an elevator (called the East Elevator Shaft).

West Silo
The roof of a silo containing 3 cogs (6, 6, 7). It connects to West Silo Catwalk via the elevator, West Silo Control Room, and Center Silo.

West Silo Control Room
Contains a button which will unlock 1/2 of the center silo door. Cogs on the West Silo must be defeated to enter this room.

East Silo Control Room
Contains a button which will unlock 1/2 of the center silo door. Cogs on the East Silo must be defeated to enter this room.

Center Silo Control Room
Contains 4 cogs (6, 6, 6, 9) which includes the Factory foreman. When the cogs in this room are defeated the factory instance will end and all toons will automatically teleport away. The door to the control room is locked and cannot be opened unless both of the side silo buttons are pressed in their respective control rooms. All cogs on the silos must be defeated.

Side Entrance
The westernmost door in the factory. Connects to the Duct Room.

Stomper Alley
Connects the Duct Room, Pipe Room, and Lava Room Foyer. To reach the lava room foyer a toon must navigate through several stompers. The stomper alley also contains a Toon-Up gag restock barrel and a button to unlock the Duct Room if it has not been opened from the other side.

Pipe Room
A long room connecting the West Catwalk and Stomper Alley. It is divided into two sections each containing 3 cogs (4, 4, 5).

Lava room
Connects Lava Room Foyer and Lava Storage Room. Toons can only reach the storage room by riding the conveyor belt to the end without being pushed into the lava by pistons on both sides.

West Catwalk
A hanging walkway connecting various rooms of the factory. Guarded by goons (7 damage). Connects to the Warehouse, Boiler Room, Pipe Room, and Oil Room. The door to the Oil Room is locked from the opposite side.

After successfully defeating many groups of cogs and getting past the obstacles, toons must face the Factory Foreman in the Center Silo Control Room. It is a level 9 skelecog, the highest level cog in the factory, who is accompanied by three level 6 cogs. When the Foreman and the accompanied cogs are defeated, the toons will get their reward for completing the factory: gag experience, and Sellbot suit part (if the suit is not complete) or merits (if the suit is complete)

Note that any Toon who misses the battle against the Foreman will not gain any credit for gags, Toontasks, and Sellbot suit parts or Merits, no matter how many cogs were defeated in the Factory. The entire party will be notified when a Toon confronts the Foreman.

Players often take certain routes to obtain a certain number of merits. The choice of route is determined by the number of merits a player needs. Listed are rooms where cog battles occur. Below are the more common routes used.

The Short Route yields up to 240 merits (or 480 during an invasion). 20 cogs are battled in this route. This is the most common short route.

This Short Route gives 236 merits (or 472 with an invasion). While 20 cogs are still battled in this route, because the Boiler Room has lower leveled cogs compared to the Gear Room, it yields a little less merits than going through the Gear Room.

This route yields 236 merits (or 472 with an invasion). A short route from the Side Entrance. 20 cogs are battled in this route.

The Long Route yields up to 388 merits (or 776 during an invasion). All 35 cogs must be faced in order to obtain the total amount of merits. This is a very common route when players' required merits reach 800 (Glad Hander Level 8) or beyond, and more so as their cog suit becomes further promoted.

The front entrance has no laff limit, but the side entrance only allows toons with at least 31 laff points remaining to enter.

A Goon roaming the factory

A toon in the Oil Room. 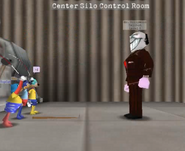 An example of how hard the Factory once was. 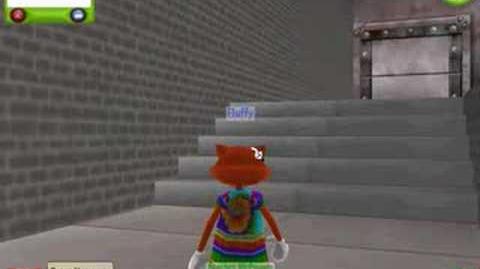