Sellbot Towers is the home of the Vice President. Up to eight toons can enter to fight it if they have completed their Sellbot cog suit and have the correct number of merits.

The toons arrive from the elevator to see the Vice President promoting cogs to official Sellbot cogs, and they are the next to get promoted to a Sellbot. The toons in disguise split into two groups and walk down the ramp. The VP greets the cogs, not knowing that they are actually toons. A certain toon, locked in a cage, suddenly interrupts the Vice President, asking for the toons' help in defeating the boss. The VP realizes that the cogs are toons and removes their disguises in a cloud of smoke.

The VP summons some cogs from its undercarriage, which the toons must defeat. Sellbots with levels ranging from level one to twelve come out of the undercarriage. Very often, the first round begins a level one Cold Caller along with a level twelve Mr. Hollywood.

When one side of the cogs is defeated, the cage lowers slightly. When both sides are completed, the caged toon exclaims that the VP is trying to get away while he rolls up to the higher platform.

The Vice President slowly goes up on the ramp that was first defeated, going to the elevator area. Coming in contact with the VP results in a loss of one laff point. When the VP finally reaches the elevator area, the skelecog round begins. The toons are once again split into two groups and must defeat Sellbot skelecogs that range from levels eight to twelve. When one side of the cogs is defeated, the cage lowers. When both sides are completed, the cage becomes lowered enough for the pie round.

The caged toon states that when toons jump to reach the bottom of the cage, they receive an unlimited arsenal of cream pies. They must hurl the cream pies into the Vice President's undercarriage when it opens, which stuns it. When it is stunned, they must hurl pies at its head or in its stomach area, which pushes it back. The goal is to stun and push the VP enough that he falls over the edge of the platform it is standing on. However, the VP tries to attack the toons when it is not stunned and also attempts to drive back up to the top. If a toon gets hit by a cream pie, they are healed one laff point.

When the VP has been pushed down enough, it will fall off the edge. Skill points and ToonTask credit are rewarded as all the toons dance.

The Vice President has many special attacks it can use:

End of the battle

All of the toons gather near the cage. The cage opens, and the shopkeeper walks out and rewards the toons with their SOS card. They also receive their cog suit promotion from the Vice President.

During the Storm Sellbot, any toon - regardless of whether they have membership or the cog suit or not, the latter of which was given a rental cog suit - were able to enter Sellbot Towers. At this time, cogs summoned by the Vice President could not go higher than level five, and it dealt less damage to toons. 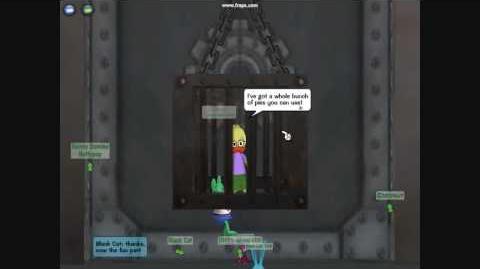