The Toon Council is a group of toons who pass all laws, decrees, bills, and other important items in Toontown and are also the main governing body. The chairman is Flippy who has his own office in Mickey Toon Hall. Also, one of the leaders of the Toon Council is Lil Oldman who resides in The Blizzard Wizard on Walrus Way in The Brrrgh.

Not much is known about the Toon Council, but one of their known duties is to supervise toon names. When a toon requests a name when you create a toon by using Type-A-Name, the Toon Council will look over the name and will either accept or reject the name (forcing the toon to choose another name). If accepted, the toon will receive a certificate for the toon's name from the Toon Council.

Another known duty is to warn toons about Cog headquarters and keep toons safe from the dangers dwelling inside the headquarters. The Toon Council has instituted laff limits on various elevators of the headquarters, preventing toons with a lower laff amount than the limit from entering the elevator. They also appoint Toon Troopers and Resistance Rangers.

And yet another duty from the Toon Council is to mail you the gifts, such as shirts or furniture, from redeeming codes or awards from winning contests.

The only known members are Flippy and Lil Oldman. 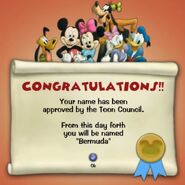 The certificate for the Toon Council accepting a toon's name

An example of Toon Council issuing out Laff limits for Cog HQs (from "The Toontown Times" webpage).
Add a photo to this gallery
Retrieved from "https://toontown.fandom.com/wiki/Toon_Council?oldid=164148"
Community content is available under CC-BY-SA unless otherwise noted.