Toon Headquarters (abbreviated Toon HQ) is a toon building found in every playground and street except Goofy Speedway and Chip 'n Dale's Acorn Acres. This is where toons go to acquire and hand in their ToonTasks. There are four officers in each building. They came out on September 10, 2002[1].

Inside the Toon HQ 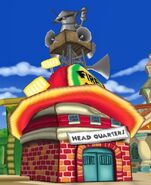 HQ Harry as depicted in this photo.

The Toon Platoon inside Toon HQ.

An illustration of Toontown Central's Toon HQ from Toontown JP.
Add a photo to this gallery

Retrieved from "https://toontown.fandom.com/wiki/Toon_Headquarters?oldid=166505"
Community content is available under CC-BY-SA unless otherwise noted.