The Toon Platoon is a board in Toon Headquarters. It was first released on September 10, 2002[1] with Building Stars and March 20, 2003[2] with the Toon Platoon. It lists the top ten currently online toons and how many cog building floors they have defeated.[3] If a toon defeats enough cog buildings, they will get a star. Each floor grants one point.[4]

If a building that a toon has rescued is taken over by the cogs, the toon loses credits to that building. If the toon switches districts, the credits do not travel over as each district has its own Toon Platoon.[5]

This table lists the minimum number of buildings to obtain a star. 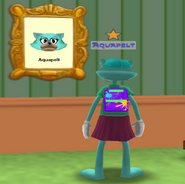 A cat toon with star and picture inside the toon building she saved.

Three toons, each with a different color star, in a building.
Add a photo to this gallery

Retrieved from "https://toontown.fandom.com/wiki/Toon_Platoon?oldid=161183"
Community content is available under CC-BY-SA unless otherwise noted.