Toontown Beta refers to the time of development of Toontown Online prior to its release to the public on June 2, 2003. During this time, the game had no cost to volunteers.

There were two phases of beta development: Beta 1 and Beta 2. The exact bug fixes and additions can be found on the release notes section of the test website.

Beta 1 was the first of public testing, and began in August 2001. During this time, many common gameplay elements that are currently in the game were added, as well as certain phrases that were removed such as "You're a jerk!". Unfortunately, the game was very unstable at this time, resulting in the common loss of data, including the deletion of toons, loss of gameplay data, and the loss in-game achievements. Testing lasted until January 16th, 2002. The game servers were noted by Disney Online Worlds as being "accidentally left on... by some forgetful developer". [Citation Needed »]

Beta 2 began on September 10th, 2002. This phase of testing holds much resemblance to Beta 1, in that the game was still gaining stability. Beta 2 only lasted one month until October 21st, 2002. Many minor optimizations took place during this month, mainly consisting of crash fixes related to various gameplay aspects and reduction of difficulty in some ToonTasks. Some of the more prominent updates that occurred in Beta 2 were the adding of Toon Headquarters, clothing stores, new ToonTasks, gag shops, the adding of the new Toontown Central that we all know today, and jumping, There was an issue where Toons that did not choose the Sound track had to deliver a bugle to Professor Pete, thus they got stuck because they chose the Toon-Up track instead. This was then fixed as developers changed the quest requirement to a squirt gun, rather a bugle. Environmental changes were made in the Toontorial during Beta 2. Minnie was also added to the Toontorial during Beta 2 also.

"Limited engagement", otherwise known as "sneak preview" refers to the discounted pricing for those playing the game after the conclusion of Beta 2, and before the official release of Toontown Online, on June 2nd, 2003. During this time, those who signed up for Toontown would receive a discount of roughly 40% off their first month of membership. Specifically, the prices were $5.95 for their first month, and $9.95 for each month after.

The official statement, found on the Toontown Webpage, read the following:

"Thank you for all the feedback and hard work put in to the beta test. Your comments and bug reports helped make Toontown a better place for everyone. We have officially launched the Sneak Preview, and all beta accounts have been deactivated. As part of this Sneak Preview, the initial offer to subscribe will be a discounted $5.95 to sign up and play for one month, and then $9.95 per month afterwards. This discounted pricing will only be available to charter members who participate in the Sneak Preview. Beta testers, remember to sign up with the same e-mail address used during the beta." Toontown.com, October 21st, 2002

A beta version of the map of Toontown

Toontown Central before Toontown Beta. Notice how the toons have colored gloves and colored name tags

The Create-a-Toon menu before Toontown Beta

An old version of the Toontown Race Game. Notice how Toons are competing against Suits (Cogs)

How the trolley looked before Toontown Beta

An older version of Toontown Online's COG Battles. There are no "Health Meters" on the COGs' torsos. The street is also slightly different. 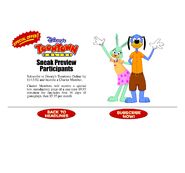 A "Sneak Preview" of Toontown Online back when it was in its earlier state.

One of Toontown Online's earliest articles. 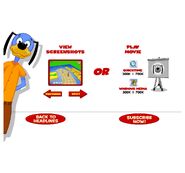 An early "Preview" of Toontown Online. 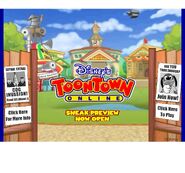 Toontown Online's website while it was in Beta, and while it was still being tested. This website was animated, and would have Gags and Cogs flying around. 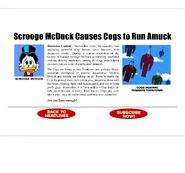 An image of one of the earliest Toontown Online articles. This article states how Scrooge McDuck apprarently caused Cogs to run amuck. There was an animated version of how this happened in the original Toontown Online download.
Add a photo to this gallery

Retrieved from "https://toontown.fandom.com/wiki/Toontown_Beta?oldid=153305"
Community content is available under CC-BY-SA unless otherwise noted.