Trapdoor is the level five Trap gag. It succeeds the Quicksand but precedes the TNT.

To determine the next increase in damage for the Trapdoor, take the number of skill points required to obtain the next gag and divide it by one more than the number of increase (the maximum damage + 1 - the original damage). You should therefore get an estimate.

For every 364 skill points, the Trapdoor's damage increases.

The toon activates a switch, causing a Trapdoor to appear on the ground.

The cog notices the Trapdoor and falls through it.

The cog is looped to the top and falls down to the ground. 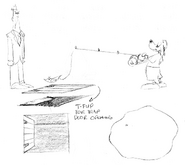