Tug of War is a trolley game. The minimum number of toons required to play is one.

The objective is to pull the opposing team into the water within the time limit. This game can be played alone or with a group of toons. When played alone, the toon is against a cog. When playing with other toons, the toons may play against each other or with another cog.

Depending on the playground, the difficulty of the cog increases. 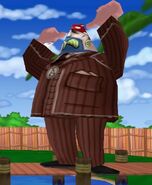 The outcome of losing the game.

Against a Double Talker

A Penny Pincher vs. a Toon
Add a photo to this gallery

Retrieved from "https://toontown.fandom.com/wiki/Tug_of_War?oldid=166262"
Community content is available under CC-BY-SA unless otherwise noted.