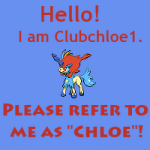 Random quote:
"Why doesn't Wikia let you disable Visual mode on the editor on the wiki itself?!"
Random favorite quote:
After a series of error codes from a robot in Super Paper Mario:
"CTRL. ALT. DELETE!!!"

Amphy is in good health.

Amphy is in good health.

♥ ←This is my current signature. Don't forget it.

I'm Clubchloe1, one of the staff members of Ōkami Wiki, where you will find me editing the most there.

I'm one of the template makers at Ōkami Wiki, and have created many, and was the one who introduced rounded corner templates to that wiki. I have made some nice looking navigation templates there, and you can see them at this category.

The reason why I was promoted to admin on Ōkami Wiki

Well, when I first joined, I only made a measly 14 edits and stopped editing there for awhile, then some inspiration came to me I needed to edit there more, so I did, then I first started off by upgrading the wiki to having rounded corners, then I saw the lack of important notice templates there (and other useful ones), so I made them, and I was highly active there too, then after about a week, I asked Tyrant457 (the only active bureaucrat there) if I could be an admin, then I woke up the next morning and saw I had admin rights ^_^ I was so happy! This was the first time I got to be promoted to admin on a wiki other than the one I adopted! And at the same time, a good friend of mine I met on the same wiki was promoted to admin too (because he had made over like 1,000 edits, and edited everyday he could). The main reason why I wanted to become an admin on there is because the only active staff member is busy with collage, and I had made so many edits and never got my own edits undone that I figured I might aswell to help out. And the other thing was about my templates I made there, they never got deleted unless I wanted to. And they're still up there today (some aren't, and I deleted them because some of them because I realized should only be on Wikipedia)! But yeah, have created a ton of templates there, and made a ton of edits and was active enough to become one.

What I do here

Since the apparent only user who has created templates here is Bermuda, I'm gonna be making some of the templates here aswell. I have a lot of ideas for templates, such as link templates, color templates, and many others that I think this wiki can use. I also revert edits made in bad faith, vandalism, spam, etc. I also like to clean up the use of "you" and "your" on articles since when I first came here I noticed that the writing style isn't fine enough, and we do have a manual of style here that no one even follows or even most of the time reads before editing, and it does say to speak in third person. So here's what you guys should say instead of "you" and "your":

My favorite wiki's (I guess)

I can take template requests - you do have to give details about the template (i.e. colors, links, placements, etc.). If you need a certain template fixed, then you can also request that to me too. I take the following for requests:

Just leave a message on my talk page with the request and the details and I will make it for you!

The achievements I have gotten here

Since you are on my page for whatever reason, I will put a poll here because I feel like it.

Now that if you do like Pokemon, I encourage you to take another poll:

Now here's another one:

Whenever I get to name stuff like that, I name it randomly (i.e. whatever pops up in my head). I just like naming my toons funny names.

Originally, it was going to be my real name (Chloe), but I decided to name it something I like to eat :)

I'm not gonna make a guide here, I made one on Ōkami Wiki. That page may not be the standard for templates here, but it shows what you'll need to know when making a template. 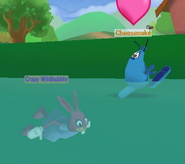 Me and Cheesecake swimming

My Angel wings go through my ears when I'm swimming..

My Doodle's foot mysteriously buried itself in the ground...(i.e. GRAPHICAL GLITCHES) 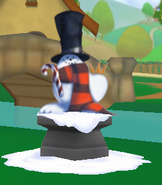 WHOA...so this is what it looks like outside of the fences... 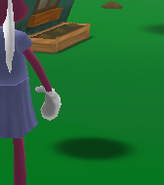 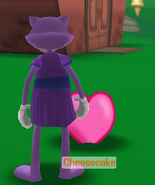 MORE GLITCHES!!! (And the animation if you pet it/feed it will still be like that)
Add a photo to this gallery

Retrieved from "https://toontown.fandom.com/wiki/User:Clubchloe1?oldid=117237"
Community content is available under CC-BY-SA unless otherwise noted.