Not to be confused with the Club President in the cog golf courses.

The Senior Vice President of Sales, commonly abbreviated as the V.P., is the boss of the Sellbots.

The VP is a boss cog, with binocular-like eyes, large teeth, and two faces. He wears a violet Sellbot suit with a white collar underneath. He has a yellow and green light bulb on his head. The VP sits on a gear-shaped podium that retracts and resembles a tank, and moves using silver tracks on the bottom of the podium.

A Whole Cream Pie is used to defeat the Vice President. To throw one, press the delete key, insert key or the pie button at the top of the screen. On a Mac, press the FORWARD DELETE key. Instead of buying these from Goofy's Gag Shop, you can get them for free from the captive shopkeeper. You will have unlimited Whole Cream Pies after you get them from the shopkeeper. A pie must hit the Vice President above his treads while he is distracted by toons. Then he will be stunned and toons will be able to damage him.

The VP will fall off the towers and be defeated. Then you'll collect your reward and be automatically teleported back to Daisy Gardens.

Your reward consists of gag points, and the toon that you saved can help you in battle if you need him/her. See the SOS toon article for more details.

The V.P with his Skelecogs

Back of the trading card. 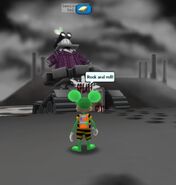 The VP waves its arms and falls over the edge. 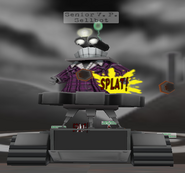 The V.P. hit by pies, but they are not effective.

The V.P is the only Boss Cog who smiles. 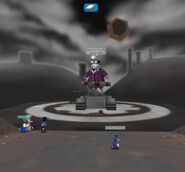 The VP, This is the platform he falls off at the end.

The Sellbot Towers, where the Vice President resides. 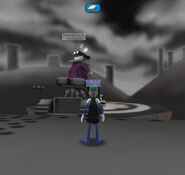 Undercarriage Gears. It is also the time to stun the VP

The VP falling. At this stage, the VP is defeated.
Add a photo to this gallery
Retrieved from "https://toontown.fandom.com/wiki/Vice_President?oldid=111051"
Community content is available under CC-BY-SA unless otherwise noted.